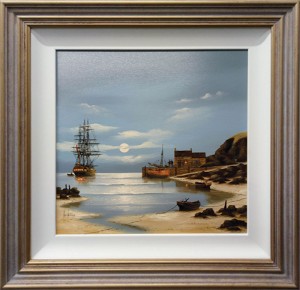 Ken has been a professional artist since 1971 and is self-taught. He first exhibited his work on the Hyde Park railings at Bayswater, central London, where he realised his work had a public appeal. A lifetime love of boats and the sea brought him to the south coast, where he now lives and works.

Ken made a name for himself in the art world as a traditional artist and his work has been sold in many galleries throughout the UK.

In developing his style of traditional marine art, he has spent time crewing various sailing vessels, including The Sir Winston Churchill (a top sail schooner) and Thames barges. These experiences helped Ken with his understanding of the rigging and working of old sailing ships.

Further to his traditional work, in recent years Ken has developed more contemporary styles and techniques, moving with current trends within the art world and appealing to a much wider following. Ken works in mediums including watercolour, pen and ink, oil and acrylic and likes to experiment with new techniques and materials, such as painting on glass, using metallic leaf and trilogy box canvases.