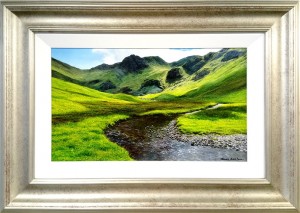 Michael is the second son of the British landscape artist David Smith. As far back as Michael can remember he was surrounded by artistic endeavour as his father worked in his studio.

At the age of seventeen, he achieved a place at the Southend College of Art and Technology to pursue his initial desire to train as an architect. In 1993 he decided to attend one of his father’s exhibitions at Harrods Picture Gallery.  Witnessing the response from the public – the respect, admiration, and delight expressed by strangers to his father’s paintings, changed Michael’s viewpoint and he realised that Dad was indeed a Master.

During his college years, Michael began to identify more strongly with the idea of becoming a professional artist.  Michael set up his easel alongside his father’s in the studio and cut his first professional canvas at the age of nineteen. A local gallery accepted it on sale or return; before he arrived home from the gallery, it was sold.

One of the most striking features of Michael’s work is the unique detail present in each painting, often featuring a lowland stream, its glassy reflection an indication of Michael’s ability for intense observation. . .